It's time to stop worrying about the risk of a spent fuel pool fire at decommissioned nuclear reactors. Even at operating reactors, there is good reason to put the risk quite low on any table that prioritizes items worth fretting over.

According to modern analysis using up-to-date data and physically representative models-with appropriately conservative assumptions-the staff at the U. S. Nuclear Regulatory Commission has reached a series of important conclusions:

1. Spent nuclear fuel storage pools are strong, robust structures that are highly likely to survive even the strongest of potentially damaging events. That is true for even the most limiting case of elevated pools used in Mk 1 boiling water reactors:

The staff first evaluated whether a severe, though unlikely, earthquake would damage the spent fuel pool to the point of leaking. In order to assess the consequences that might result from a spent fuel pool leak, the study assumed seismic forces greater than the maximum earthquake reasonably expected to occur at the reference plant location. The NRC expects that the ground motion used in this study is more challenging for the spent fuel pool structure than that experienced at the Fukushima Daiichi nuclear power plant from the earthquake that occurred off the coast of Japan on March 11, 2011. That earthquake did not result in any spent fuel pool leaks.

2. If an event even more powerful than the already extreme assumption occurs and a pool is damaged enough to cause a significant leak, it is almost certain that the used fuel inside the pool will remain intact. The only period in which there is any doubt about that statement is during the first few months after the most recently operating fuel has been put into the pool:

3. Even if all else fails, and-somehow-there is an event that both empties the pool and causes the protective cladding on the fuel to catastrophically fail, the chance of anyone being exposed to enough radioactive material to cause a dose that would have any health impact is vanishingly tiny:

If a leak and radiological release were to occur, this study shows that the individual cancer fatality risk for a member of the public is several orders of magnitude lower than the Commission's Quantitative Health Objective of two in one million (2x10-6/year). For such a radiological release, this study shows public and environmental effects are generally the same or smaller than earlier studies.

(Note: The quoted statements come from pages iii and iv of Consequence Study of a Beyond-Design-Basis Earthquake Affecting the Spent Fuel Pool for a U.S. Mark I Boiling Water Reactor dated October 2013. The numbered statements are my interpretation of what the analysis results mean to the rest of us.)

The staff at the NRC did not reach these conclusions lightly. Even though the NRC and its predecessor agency have been encouraged to study this area in excruciating detail for more than 40 years, the publicity surrounding the events at Fukushima and the mistaken belief that there were leaks from the spent fuel pools at that plant caused the agency to initiate yet another study, the results of which are quoted above.

That study was not a minor effort. After reviewing the document, which includes a total of 416 pages of material, including detailed responses to comments, I contacted the NRC public affairs office and asked the following question: "How much NRC time and money was invested into the production of the document titled "Consequence Study of a Beyond-Design-Basis Earthquake Affecting the Spent Fuel Pool for a U. S. Mark 1 Boiling Water Reactor" dated October 2013?"

Here is the answer I received from Scott Burnell, NRC Office of Public Affairs:

That makes a total of 11,530.25 hours. That is more than 5 person-years, but it involved at least 24 separate individuals. The current professional staff hour rate for the US NRC is $272, so the NRC staff time associated with the study cost licensees $3,136,228. There are many other costs associated with a study like this that are not included in that total.

It is no wonder to me that four of the five NRC commissioners-who have been appointed and confirmed as independent, knowledgeable professionals charged with ensuring that all activities associated with using radioactive material in the United States are adequately safe-voted to move on and stop studying the non-issue of storing used fuel in licensed spent fuel pools.

The Commission has approved the Staff's recommendation that this Tier 3 Japan lessons-learned activity be closed and that no further generic assessments be pursued related to possible regulatory actions to require the expedited transfer of spent fuel to dry cask storage.

The only vote against closing the issue and continuing with more study and analysis was NRC Chairman Macfarlane. She is not only an academic with the  common academic belief that it's worthwhile to keep studying interesting issues, even if they seemingly have little importance, but is also someone with a long publication history questioning virtually all spent fuel storage options.

It is also no surprise to me that Senators Boxer and Markey and their staffs have failed to get the message, and continue to insist that yet more expenditures be devoted to this issue, even though it has no impact on safety.

Finally, it is not surprising that professional nuclear energy skeptics such as the Natural Resources Defense Council and the Union of Concerned Scientists insist that the NRC analysis was incomplete, that there were scenarios that were not studied, and that there were hidden consequences that were not included. After all, interfering in all possible ways with any activity designed to provide temporary or permanent answers to the question: "What do you do with the waste?" has been a plank of the antinuclear platform for at least 40 years.

The effort to constipate nuclear energy by focusing on "the waste issue", including pushing an expensive effort to move used fuel to dry casks as soon as possible, has been ongoing ever since Ralph Nader gathered a disparate collection of local activist groups in the summer of 1974 under the Critical Mass Energy Project banner. 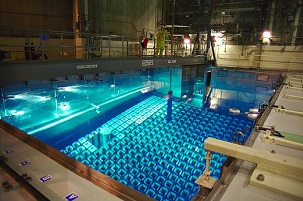 The Nuclear Waste Technical Review Board (NWTRB) announced it will hold a public meeting on September 13–14 to review information on Department of Energy research and development activities...