The 6th annual Thorium Energy Alliance Conference was held in Chicago, Ill., last week and brought together professionals from the nuclear fields and others interested in energy issues.

Thorium as an energy source is not always a frequent point of discussion within the American Nuclear Society because the existing nuclear fuel cycle in the United States, and that of all other countries that use nuclear energy, is based on uranium. However, the potential for using thorium as an energy source is great and we should keep our minds open to researching alternative nuclear energy technologies (see "The Use of Thorium as Nuclear Fuel" - ANS Position Statement 78).

The conference started with opening remarks from Thorium Energy Alliance Executive Director John Kutsch, in which he explained that we have a "perceptual blindness" to the second- and third-order technologies that today's research can create. He emphasized that we need to be thinking of the vast possibilities for new nuclear energy technology and the role that thorium can play in advanced reactor designs. 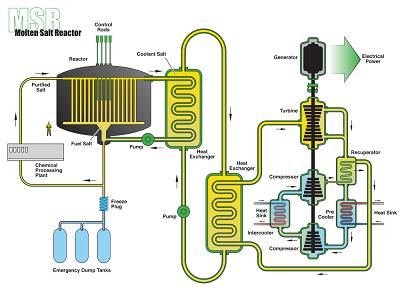 In a liquid fluorite thorium reactor (LFTR) design, thorium and uranium-233 are dissolved in fluoride-based salts to form a liquid fuel. This fuel is pumped between the core and a heat exchanger to transfer heat to a secondary salt loop, which then transfers the heat to a steam turbine, as illustrated in the image above. This technology was first investigated at the Oak Ridge National Laboratory Molten-Salt Reactor Experiment in the 1960s.

If you want to learn more about thorium, check out the "Th" Thorium Documentary video playlist on YouTube, created by one of the TEAC6 conference attendees, Gordon McDowell. You can also see tweets from the event by clicking on #TEAC6 and support the cause through the Energy From Thorium Foundation. In addition, look forward to a new documentary coming out soon about the benefits of nuclear energy and using thorium as fuel, called The Good Reactor.

Lenka Kollar is the Owner & Editor of Nuclear Undone, a blog and consulting company focusing on educating the public about nuclear energy and nonproliferation issues. She is an active ANS member, serving on the Nuclear Nonproliferation Technical Group Executive Committee, Student Sections Committee, and Professional Women in ANS Committee. Connect with Lenka on LinkedIN and Twitter.

The House Appropriations Committee has delivered to the full House the fiscal year 2023 Energy and Water Development bill in a 32–24 vote, along with a notable amendment concerning, among...

Legislation known as the Thorium Energy Security Act, introduced in Congress last month by U.S. Sen. Tommy Tuberville (R., Ala.), would put a halt to the destruction of U.S. stockpiles of...

The U.S. Department of Energy and Norway’s Ministry of Trade, Industry, and Fisheries have signed a memorandum of understanding to advance a project aimed at eliminating Norway’s...

China is moving ahead with the development of an experimental reactor that would be the first of its kind in the world and “could prove key to the pursuit of clean and safe nuclear power,”...

Food Irradiation Can Save Thousands of Lives Each Year

The Centers for Disease Control and Prevention (CDC) estimates that 1 in 6 people get food poisoning each year in the United States and that 3000 die from foodborne illness. Food irradiation...

Where Do Nuclear Engineering Students Work After Graduation?

Earlier this month, the Oak Ridge Institute for Science and Education (ORISE) published its annual survey on nuclear engineering enrollment and degrees (check out the full report here). The...

We don't really know how much trouble we are in with global warming, but if it continues, experts tell us to expect flooding in coastal areas, intense storms, droughts, regional food and water...

Prisoner's Dilemma is a famous example of game theory. You can look at this example in quite a few ways. I especially think of this game when I am thinking about Liquid Fluoride Thorium...