Below is the first of Will's narratives on why this technical tour - and a tour last year - are so important to him.

Deliberately revisiting, face to face, the ghosts of one's past is something few of us choose to do - and rarely do we do it publicly.  Next week, I'll have the chance to do just that for the second time in a year, by courtesy of ANS - and I wonder if the impact on me will be as profound as that which occurred last year.

At the 2012 ANS Winter Meeting, a Technical Tour of a submarine at Naval Base Point Loma was offered, and I jumped at the chance to again set foot on an active US Navy nuclear powered submarine for the first time in twenty years.  The last time I'd stepped off of the USS Simon Bolivar, SSBN-641 as a Reactor Operator was in 1993, and at that time (although I didn't know it yet) I was also walking, at least temporarily, away from nuclear energy as a vocation.  What I did not walk away from was my passion for the technology of nuclear energy and the people who both design it and make it work... it always comes down to people.

After many years I did occasionally find myself having dreams about being back on the boat; it turns out that many of us who leave the fleet as young men and women do.  They became more frequent and more vivid, and the questions about having left the Navy began.  I could, perhaps, find the answers by taking the ANS tour of a boat and see what sprang up.  As the meeting approached, I wondered if my mind would focus on the tour more than anything else, but the work load and long days didn't allow it.  But soon enough, it was time to force the echoes of my past to meet the realities of today, and see which stood after. 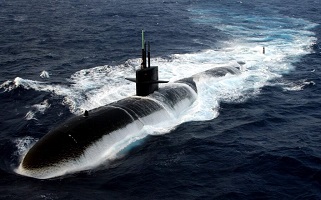 The bus ride was brief, and I presently found myself on the pier with a group of "nukes" of various backgrounds and ages, all ready to tour the USS Albuquerque, SSN-706.  On the pier, I struck up a conversation with Steve Seaman of Westinghouse Nuclear who talked about his past in Instrumentation & Control (I&C) with Navy nuclear plants.  We talked a bit about why each of us was there, and I let slip part of why I was on the tour.

Immediately when on board, I knew I had done the right thing; the boat smelled like a nuclear boat should smell, at least to a sub sailor - a scent not necessarily for everyone, a mixture of various substances one won't find just anywhere - and when I got below I knew that the boat (even though of an unfamiliar class) "looked right" - and that I hadn't been able to make it all the way down the ladder without a banged knee.  It had been over two decades since the last time I'd navigated such a ladder.

The tour showed me active, young, bright men in the prime of their lives, I imagined concerned (as we all were at that age) about a dozen different things that won't matter nearly as much in middle age.  The brief talk with the EDEA on the mess decks made me feel frankly a bit old; how is it that as a new RO on board my boat so many years back, the EDEA's seemed so old, and now here I was seeing a man many years my junior?  The memories weren't erased, weren't corrected; they were jogged, and my perspective altered.  For the better.

Over an hour later, as the group of attendees walked in clusters here and there, seemingly more slowly back up the pier than when they had come down, and as we all 'debriefed' the tour, Steve and I had various small talk about how some of the things looked familiar - how some things never change, but how some things did.  After a short pause, he said "Did you find what you were looking for?"  I smiled a bit, and said, "I think so.  I am pretty sure now, seeing those guys, that I couldn't still be doing what they're doing - not as well, not now."  "It's a young man's game, all right," Steve observed back, perhaps echoing my sentiment or perhaps validating it.  Maybe both.

As I got to the end of the pier, I thought it was odd that I didn't really want - or need - to take a look back one last time over my shoulder, as I clearly recall having done while still in uniform in King's Bay only a week before receiving my honorable discharge back in 1993.  The nuclear Navy is in good hands - it's the same.  Sure, Admiral Rickover took care of a good part of that; his echoes still resound in the program, there's no doubt.  But the excellent young men (and now women!) of the nuclear Navy (and the Navy in general) have things well in hand.

I haven't had another dream about being on a submarine since.  I've walked away, finally.

Next week, I'll get the chance to make another trip - again, courtesy of the American Nuclear Society - part of another set of memories, and emotions, of which I have no intention of walking away.  That which got me interested in nuclear energy as a cause, not just as a job - the NS Savannah.  I worked on the ship, in a set of curious circumstances, while in the Navy - but that part of the story will wait until next time.