Yesterday, a panel of three terrific communicators shared their insights and best practices at the American Nuclear Society Annual Meeting in Atlanta. I was privileged to be the moderator for the Communicating for New Nuclear Facilities session. Their unanimous advice:

Nuclear Development Communications Director Todd Terrell discussed the extensive outreach that Southern Company conducts on a routine basis, along with the important role that the Employee Speakers' Bureau plays in its outreach. In addition, he spoke about the degree to which the company works to be transparent, including holding periodic meetings with critics whose agendas include environmental, nuclear, and policy issues.

Westinghouse External Communications Director Vaughn Gilbert shared the company's excellent new broadcast commercial, which soon will be shown in a variety of venues including Washington, D.C. He described the company's decision to focus on stakeholders outside the nuclear energy industry, whose support will be important to the industry's future success. As with Southern Company above, Westinghouse has reached out to critics as well.

Amy Lientz, director of Communications and Government Relations for the Idaho National Lab (INL), described the challenges the lab faces in modernizing critical aging facilities and building new ones in an era of tight budgets, sequestration, and continuing resolutions from Congress. The INL, too, works for transparent communications, while recognizing that some actions-for example, those involving individual personnel matters-must remain private. In addition, she recognized the unique challenges of timely communications from government entities. 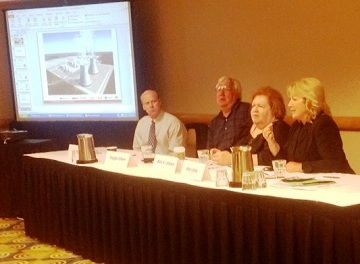