All in attendance sat up a bit in their chairs at the session "Managing the Spectrum of Risks in the Complexities on New Build Nuclear-Call for a New Business Model to Meet the Challenges and Opportunities in the U.S. and International Nuclear Markets" held Monday afternoon at the ANS Annual Meeting. Rob Graber of Energypath Corporation stated from the podium that "90 percent of the new build nuclear plants under construction today are being built in nations that have state capitalism systems," meaning nations like China where the government is heavily involved with programs and the line between private and public investment is blurred. This was just one of the sobering but necessary observations offered during this highly valuable session.

The first speaker of the session was Bill Linton of Linton Consulting, pointing out that using a "strategic view" analysis, stretching many years into the future, is essential in the decision making for or against new nuclear plants in the United States. He noted that while there are about 69 reactors under construction world-wide right now, with somewhere between 150 and 200 more planned, 28 of these plants under construction are in China, 11 are in Russia, and 7 are in India. "The nuclear industry really is global today," he observed, pointing out that the nuclear fuel cycle is already a global chain business, as is the business of plant components. While other nations are building nuclear plants at high rates, the U.S. industry has experienced, at home, a slow growth rate-which led to a slow build rate, and slow development that has inevitably led to a decline in U.S. nuclear construction influence worldwide. In fact, Linton mentioned that a Nuclear Regulatory Commission employee had remarked to him at one time that the United States' nuclear industry "is 40 years into a 60-year business," implying that after the current generation of plants reaches their life expectancy, that's essentially the end.

Of course, the potential solution to this is both rapid development and innovative financing and operating arrangements, which Linton said are vital to the future of nuclear energy everywhere. He pointed out that Russia can "do it all"-finance, build, own, and operate nuclear plants anywhere. And Russia will do so in Turkey. He put the potential program of any nuclear state into perspective when he said that "nuclear power is at least a 100-year commitment, start to finish, by any nation." Clearly, this includes spent fuel storage or recycling or transfer out of country, since the currently accepted range of prospective plant life is 60 to possibly 80 years.

Graber, in his presentation on Maintaining the Nuclear Option in the United States, started off by pointing out that, for investors, a high level of uncertainty about the capability of any sort of large project to complete can trigger a "no go" decision-and since only in nations with state capitalism systems is there little consideration of these factors, only those nations might see a large buildout of new nuclear plants.

However, on the bright side for U.S. nuclear plants, Graber pointed out that natural gas prices have (according to his calculation) a 31-percent volatility in any year-meaning that giant swings in price can erase all the economies of natural gas at just about any time. The implication is that in merit-based load dispatching scenarios, nuclear becomes a better option when that happens. Graber also noted that natural gas plants (because of the price and supply volatility) actually have a higher chance of NOT being operated, once built, than do nuclear plants. Thus, in one way, they can be a riskier investment than nuclear plants. He showed that for nuclear plants, there are a number of construction option premiums in his "Option Based Construction Model" throughout the whole cycle of plant build and operation (including delaying the plant, scaling back the plant, accelerating construction of the plant, or abandoning the plant) that make nuclear plants somewhat more attractive than might first appear to investors; in other words, the option model of construction (in use for the Blue Castle nuclear plant project) provides advantages over other types of plant that go up faster but may never run.

Graber outlined the process advantages in state capitalist nations, in comparison to U.S. builds that seem almost like FOAK (First Of A Kind) in every plant. He charted the process for these other nations with the details that these countries plan and order large fleets, which leads to a rapid (and somewhat steep) learning curve but a great increase of knowledge at a high rate. This allows development of "low cost options" for plant design, and thus reduced expenses as construction quickly reaches NOAK (Nth Of A Kind) status with many plants planned/ordered/building/operating. (Past ANS President Dave Rossin rose at another point in the meeting, questioning the wisdom of using the phrase "low cost option" with nuclear, which he claimed in the past has led to "lousy designs"-one of the humorous points of the meeting for some.) 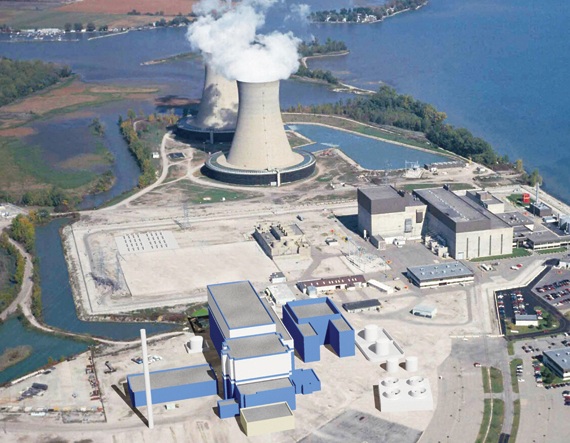 Amir Shahkarami, chief executive officer of Exelon Nuclear Partners and senior vice president of Exelon Generation, noted that during the heyday of nuclear plant construction, on average one new nuclear plant went on line about every 17 days, and that if the nuclear builds planned for the next several decades are realized, this rate will rise from the current low figure to once every 5 days by 2035.

Shahkarami predicted that "some of the larger nuclear fleets will merge," and that owners of single units will "have a hard ride." He said that more of these owners will sign operating and service contracts with large fleet operators, as happened with Fort Calhoun.

Other speakers gave points of view on the United Arab Emirates' new regulatory body, construction challenges in China and in South Korea, and the new AP1000 builds; Sandy Rupprecht of Westinghouse noted that while there are eight AP1000 plants under construction right now (four in the United States and four in China), his company is expecting orders very soon for eight more in China, and has "about 20 more units under discussion." The challenges of new nuclear financing and construction were fairly well laid out, and innovative financing arrangements (which may include such options as the vendor building, owning, and operating plants entirely for customers, or turning the plant over after a period of such operation, or other such concepts) were set up as perhaps the biggest key element that will continue the spread of nuclear plants outside of countries where the state heavily finances nuclear energy.

Perhaps a statement during the morning's Opening Plenary summed it up best: Westinghouse's Daniel Roderick said that his company "would certainly like to win the bid for every plant we can, but if we don't, we still want to play in the game"- meaning that his company is left to manufacture such things as digital I&C equipment, as it's doing for the South Korean-built plants in the UAE. Unless U.S. companies can provide innovative financing, as does ROSATOM in Russia, they may be left with a few large plant orders and some scraps.

Will Davis is a consultant to, and writer for, the American Nuclear Society; an active ANS member, he will serve on the ANS Public Information Committee 2013-2016.  In addition, he is a contributing author for Fuel Cycle Week, is on the Board of Directors of PopAtomic Studios, and writes his own popular blog Atomic Power Review. Davis is a former US Navy Reactor Operator, qualified on S8G and S5W plants.  He's also an avid typewriter collector in his spare time.