When the heat released by nuclear fission is used in a steam plant to produce mechanical power, the second law of thermodynamics dictates that a large part of the heat must be rejected to the environment. Most land-based nuclear plants reject heat by using cooling water from a river or ocean.

The environmental effect of rejected heat is a legitimate concern that has been addressed in the design process for all nuclear plants. Environmental monitoring begins with a preconstruction baseline survey and continues throughout the plant's lifetime, per regulations.

Environmental science continues to advance, and these advances must be taken into account when considering plant cooling. 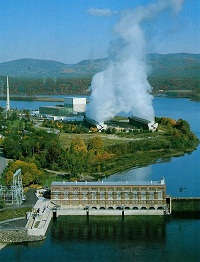 The Vermont Yankee plant design began in the 1960s, and operation began in 1972. The plant is located on the Connecticut River in Vernon, Vermont, in the southeast corner of the state. The Connecticut River borders Vermont and New Hampshire, flows south through Massachusetts to Connecticut, and then empties into Long Island Sound. The Vermont Yankee plant is built just upstream from the Vernon Dam, and the dam's large "pond" provides the plant's cooling water.

The Vermont Yankee design included cooling towers, recently required by the Clean Water Act. Tower use is required only in warm months. River temperature requirements are specified in the plant's Discharge Permit, and have been adjusted during plant life.

Vermont Yankee's Discharge Permit is issued by the State of Vermont, under the authority of the Federal Clean Water Act. As the plant's Nuclear Regulatory Commission relicensing date approached, the plant also applied for an extended permit from the state. The state review has been underway for several years.

Meanwhile, the NRC issued a 20-year renewal of the Vermont Yankee license, and the plant then sued Vermont for trying to nullify this license through state law. The plant won in federal district court and the case is being appealed.

Then, interveners sued the NRC claiming that the license renewal is illegal because the plant does not have a valid Discharge Permit from the state. The federal court dismissed this suit on procedural grounds, saying that the state and interveners had not used every available step in the administrative process, as must be done before going to court.

A detailed blog post on these rulings is available at Yes Vermont Yankee.

The Connecticut River Watershed Council is an environmental group that monitors the river's health and acts to ensure its protection and continued cleanup. Prior to the Clean Water Act of 1972, the local lore called the river "the world's most beautifully landscaped sewer" because it was used that way by every city, town, and factory that had access. The river is far cleaner now.

However, the Watershed Council is now reporting that its studies have shown that one of the river's fish, the shad, has essentially disappeared for a distance downstream from the plant. They claim that their studies show that water temperature increases due to the Vermont Yankee plant can be measured miles downstream. The council advocates the use of Vermont Yankee's cooling towers for a longer part of the year, or even all year. Meanwhile, the state is waiting for its scientific review to be completed.

One law professor called for shutting down the plant until the Discharge Permit process is resolved. The responsible state official replied that the process must be fair and defensible in court!

About 10 miles downstream of Vermont Yankee, the Northfield Mountain Pumped Storage plant also uses the Connecticut River. It pumps water up to a reservoir at night, and releases it as needed during the day to generate power. This reservoir is on a mountain top and open to the sun, so it gains heat.

There has been no mention of this heat gain by the Watershed Council. A Massachusetts environmental professor detailed severe effects on aquatic life that were probably caused by this plant. He pointed out that many species recovered when the pump storage plant was off-line. In addition, there are reports of heavy shad fishing at the river's mouth. Will these concerns appear in the council's report? They should.

The SAGE Alliance plans a September 15th Flotilla at Vermont Yankee. Supporters are encouraged to launch any kind of craft, and also be on the river banks. Banners opposing the plant will be displayed. They will symbolically dump some ice in the river for cooling. There has not been much to keep the plant in the news this summer, so this seems to be a publicity stunt, and an effort to keep supporters energized.

It seems possible that scientific findings may eventually dictate that the Vermont Yankee plant reduce its temperature impact on the river for more months than it does now. The plant's cooling towers would have to be used more. However, tower operation reduces the net power the plant delivers to the grid. Winter operation of these wooden frame towers is problematic at best, due to potential ice damage, and probably not possible.

Likewise, the findings may also dictate changes to protect fish from the effect of the pumped storage plant. There are fish ladders around the dams, but there may need to be a long canal installed to allow fish to bypass the pumped storage intake.

Several other nuclear power plants (Oyster Creek and Indian Point, among others) also are facing challenges about discharge temperatures. The sciences of aquatic life are advancing. It may be that practices once believed acceptable will need to be changed. Nuclear scientists and engineers believe primarily in science and the scientific method. We will go where it leads us (that is why we are so passionate about publicizing correct information about radiation safety).

In terms of aquatic life, we need to accept valid, peer-reviewed findings substantiated by the evidence, even if conclusions turn out to be uncomfortable for us. However, the important point is to accept comprehensive, peer-reviewed scientific studies that look at the whole river, dams, pumped storage and all, and do what is best for the ecosystem.

He is coordinator for the Vermont Pilot Project. Shaffer holds a BSEE from Duke University and an MSNE from MIT. He is a regular contributor to the ANS Nuclear Cafe.

In his article, “The nuclear policy America needs,” journalist Matthew Yglesias says upfront that he is not a “nuclear bro.” He is not a scientist or a nuclear engineer. But he is part...

Michelle Zietlow-­Miller, outage manager at Exelon’s Quad Cities plant, had no particular interest in nuclear while growing up in the (very) small town of Great Bend, N.D. She was, however,...

The Biden administration’s climate goals will be met only by expanding carbon-free nuclear energy production, urge the American Nuclear Society (ANS) non-profit and the International...

The nuclear community continues its collective push to restore funding for the Versatile Test Reactor (VTR) project at Idaho National Laboratory for fiscal year 2022. We first heard from the...

A conversation among nuclear advocates led most to believe that nuclear supporters will have a minimized voice at this year’s UN Conference of the Parties on Climate Change, commonly known...

Stories are unfolding (or have unfolded) in three of our key states that illustrate the challenges facing the backbone of our country’s clean, reliable electricity generation infrastructure....

Jacob Wiencek, a self-described concerned resident of Honolulu, is doing his part to encourage the state of Hawaii to embrace nuclear power. An opinion piece written by Wiencek was published...

Statement from Craig Piercy, Executive Director and CEO of the American Nuclear Society:...