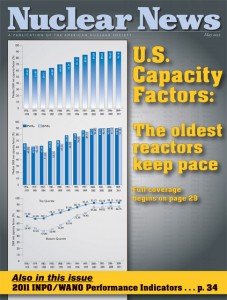 The May issue of Nuclear News magazine is available in hard copy and electronically for American Nuclear Society members (must enter ANS user name and password in Member Center).  The issue contains the following feature articles:

Other news in the issue: The Nuclear Regulatory Commission issues combined construction and operating licenses for two new reactors at Summer site; the Tennessee Valley Authority announces late 2015 startup for Watts Bar-2 and an additional cost of $1.5 million to $2 million; the NRC issues confirmatory action letter on San Onofre restart plans; the Atomic Safety and Licensing Board allows a challenge to Limerick's license renewal; the NRC's staff and the Advisory Committee on Reactor Safeguards favor a 15-percent power uprates for Turkey Point-3 and -4; Gallup poll shows U.S. public's support for nuclear power is near pre-Fukushima levels; the NRC cites PSEG Nuclear for security infraction at Hope Creek/Salem; South Korea hosts second Nuclear Security Summit; the NRC to establish new security regulations for the use and transport of radioactive materials; the National Nuclear Security Administration sends last shipment of high-enriched uranium to France; major milestone reached in waste treatment project at the Idaho Site; and underground waste tanks at the  Savannah River Site are being readied for closure.

And there is much more.

Don't go a month without your Nuclear News!